Polyureas are now a popular choice for filling and repairing saw cut control joints and construction joints on commercial, industrial and warehouse floors, as well as some exterior areas where high heels or skate wheels cross joints. In the good old days before polyureas, semi-rigid epoxies were more widely used. Which product is better?

At ChemCo Systems, we don’t have a favorite because we make a selection of both products. To choose, consider the intended use of the facility substrate and the application environment.

Control (construction) floor joints are filled for several reasons: a) protect the integrity of the joint (reduce joint nose spalling), b) safety, c) reduce maintenance costs and d) prevent accumulation of foreign debris. The optimal polymer choice may relate to the the type of traffic that uses the floor.

Cure speed is the most desirable feature as often the filled joint can often be opened to traffic within 1-2 hours or sooner. Since time is money and finishing the floor is one of the last steps prior to opening, the faster cure speed of the polyurea is often the most valuable benefit.

Because of very fast gel times, it is may be impractical to hand-mix the faster curing polyureas, so using a special pump such as our Model C may be useful on very large jobs for high production rates.

Unlike epoxies, polyureas can cure in very cold conditions, in some cases as low as -25°F. In fact, polyureas are used frequently to fill joints in large freezer (and refrigerator) warehouse floors while the freezer is in service. At this low temperature, an epoxy is dormant and will likely freeze. Usually, an epoxy will cure when the ambient air increases to 40°F or more.

Polyureas are often touted for their greater elongation capability (up to 200%+ vs. ~90% for epoxies). Yet neither polyureas or epoxies are intended for use in joints designed to move (such as expansion joints). The tall proportional cross-section (height vs width) of most control joints causes either polymer material to separate from the side wall if there is significant joint movement because neither can stretch across its thick middle.

Though polyureas are generally softer, they are generally very tough under abrasive or mechanical shock conditions. Tested in a standard Taber test rig, they may exhibit 40% less weight loss after 1000 cycles than control joint epoxies.

A cautionary note—always use an epoxy primer such as QuikPrime with a polyurea when in doubt about dampness or moisture in the joint. The isocyanate portion of a polyurea reacts very quickly with moisture and this interaction may decrease the performance of the cured polymer or cause gassing or foaming. Moisture is a more common issue with older slab on grade floors that did not have an underlying impermeable membrane liner installed prior to the pour. 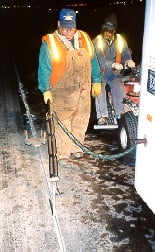 Although generally slower curing, this may be an advantage if the crack filling is done by hand pouring or a bulk caulk gun because of longer working time.

When the substrate is damp, wet, or contaminated, an unprimed epoxy has a better chance of bonding to the sides of the joint than a high speed polyurea.

In exterior applications, UV exposure causes fading and sometimes chalking of an epoxy. With aromatic-type polyureas often used in control joints, there can be significant color changes caused by sunlight which may be cosmetically unappealing.

When it comes to mixing and tolerance for “eye-balling” the proportions of A & B components, epoxies are more forgiving. Polyureas may lose some of their properties as soon as the mix ratio is off by 3-6% or more, whereas epoxies will often cure when the proportions are even further apart. Additionally, epoxies tend to be more forgiving if mixing shear is marginal.

Most semi-rigid epoxies are harder (higher durometer) than comparable polyureas. This may be a critical factor in uses when there is high point loading across floor joints such as the steel wheels on some pallet jacks.

Epoxies are generally better performers if there is a suspected moisture issue on the substrate during the application of the joint filler. The polymerization between the A and B component of the epoxy joint filler is not interfered with by minor amounts of moisture. However, if the walls of the joint are wet, then a fast setting underwater primer, such as QuikPrime, should be used to pretreat the joint walls.

Both product types are relatively chemical resistant, but the epoxy usually has an edge with organic solvents, many acids and some oxidizers and sanitizers commonly used on floors such as bleaches.

Both products can be blended (extended) with carefully selected and sized aggregates or natural sands for deep or high volume repairs. Please call to ask for our help if this option is of interest. It's most important to use only dried sands containing less than 0.2% moisture by weight for either binder.

Joint filling with either epoxy or polyurea should be deferred as long as possible after concrete floor is poured to allow for minimal additional slab shrinkage, based on ACI 302.1R recommendations.  Consult ACI 302.1R comments regarding concrete shrinkage, joint filling, and user expectations. If you need more help, call us (800-757-6773, 650-261-3790) for friendly technical assistance and the best selection anywhere. We're usually in the office by 6:30 and out by 5:00 California time. Or send an email to info1@chemcosystems.com.