Comparing and Explaining Polymers in Concrete Construction, Protection and Repair

I. Preformed, factory made, finished products.

II. Reactive single or multi-component liquids and pastes, finished at the job site.

In concrete protection and repair, Type II polymers are often selected or specified because they have the ability to "wet" surfaces when applied and to bond to the substrate when cured. In the application and cure process the reactive single or multi-component liquids (or pastes) are converted into solid polymers. Traditional building materials such as cement or lime use a similar hardening process.

How did construction polymers get their names?

What determines the characteristic properties of construction polymers?

The bulk of the product and not the reactive sites determine properties. On a molecular scale, the bulk of the resin (and hardener) can be compared to more or less cross-linked chains made out of flexible or hard links which have additional carabiner hooks attached. These hooks establish links to other chains in the curing step. The end-products can range from totally linear, endlessly long chains to completely cross-linked, short chain, three dimensional networks. Linearity of the chains in these products brings about elastic behavior, while a three-dimensional array of the links is hard.

Many construction polymers have "thermoset" character, especially if the use is load bearing. Exceptions are very flexible epoxies, some polyurethanes, polyureas, hybrids of these materials, silicones and some latex polymers. The latter group is generally "thermoplastic" or elastomeric.

Thermoset polymers products are made up of highly cross-linked molecular elements which maintain their shape when heated, but do not melt. Above about 240 to 300° F, they will lose strength and begin to decompose. Thermoset polymers are rigid (high modulus of elasticity), somewhat brittle at low temperature and have limited flexibility at higher temperatures. The mid-point of the temperature range at which the transition from rigid to flexible takes place is called the glass transition temperature. The Heat Deflection Temperature (HDT) is a simple indicator of the glass transition temperature. The HDT is referred to in the ASTM C881 specification and other specifications used in construction adhesive applications. Many construction polymers have an HDT in the range between 65 and 120° F. At temperatures in and above the glass transition region, construction polymers subjected to high loads will deform which leads to loss of bond and ultimate failure of the application.

The fact that many construction polymers are used in the glass transition temperature range should always be considered when recommending a material. Know the HDT of the product you use. Many failures can be traced to a disregard of the material behavior changes that occur in this temperature region.

Significantly below the HDT (~20° F) thermoset polymers can withstand substantial loads without deformation (creep) which is the basis for their use in construction (crack repair, bolt and dowel grouting, bonding applications).

Except for truly elastomeric products, all construction polymers have a more or less pronounced visco-elastic character. When stressed they do not entirely respond in the manner an elastic body(spring) would and they don't flow in the manner of a liquid (response like a shock absorber to a bump).

The response of a construction polymer to a stress (load) is partly elastic and partly of viscous nature. The prevalence of each of the components in response to a stress (load) depends on the composition of the polymer, the stress level, the stress exposure duration, and temperature. Short term loads generate a quick elastic response. The response to long term loads is seen in creep which is a form of viscous flow. 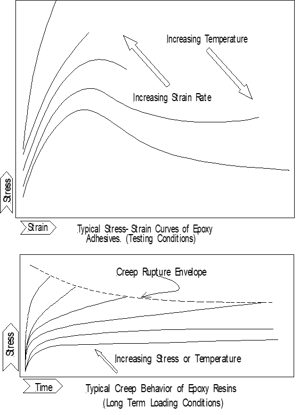 In structural applications it is critical that the construction polymer does not creep under sustained load.  The tendency to creep depends on the load level and the prevailing temperature. Each material has an envelope where creep does not produce failure at a given temperature and load level. Exposure to high temperatures such as those of a building fire should be considered as well.

Construction polymers used in "load bearing" applications should have a high HDT. When such polymers are subjected to permanent loads, particularly when these loads have a high shear component, the surrounding structure element should always remain at least 20° F below the HDT. In critical applications and as a safety measure in case of a fire thermal protection should be provided. We suggest that specifiers for construction polymers should limit the use of most structural polymers to transmit loads and not act as a point of load concentration.

In recognition of the material performance needs in load bearing applications ChemCo Systems products were deliberately designed to have higher HDTs than are offered by the industry.

Thermoplastic polymers melt when heated and return to their original state when cooled again, unless they were heated to a point above their decomposition temperature. Their glass transition temperature is often very low (< -40° F).

Thermoplastic and slightly cross-linked thermoplastics have largely predictable properties in normal construction polymer use temperatures because they are used above their glass transition temperature. Exceptions are polymers with crystalline segments within their molecular structure which melt in this region. These are more or less elastic (low modulus of elasticity) and get largely employed for this property (elastomer membranes, joint materials, roofing compositions, seals).

When a liquid solidifies (except water) a volume contraction ensues. This contraction is called shrinkage and is inevitable unless counteracted (which is difficult and very expensive). Cure shrinkage varies among types of polymers:

Volume shrinkage during cure is of significance when the curing construction polymer is in a confined space (void, gap, crack, joint, patch) and documents itself by a meniscus formation on the surface.

Linear shrinkage is an indication of the true shrinkage which takes place after the curing liquid has no longer enough mobility to flow to compensate for the shrinking volume. This form of shrinkage stresses the bond between the substrate and the construction polymer and can lead to bond or in extreme cases to substrate surface failure. To compensate for cure shrinkage many systems are extended with fillers which reduce the volume fraction of the polymer.

Flexible systems can respond to cure shrinkage by getting into a partial state of extension which in time relieves itself by viscous flow ("stress relief"). Rigid, high modulus systems respond by placing significant stress on the bond line or in the substrate surface which can lead to bond-line or substrate failure.

The cure reaction of construction polymers is normally associated with heat formation (exotherm). In cross-linked, thermoset systems, this phenomenon places an additional stress on the bond-line/substrate surface, because the product sets in an elevated temperature expanded state which contributes to cure-related shrinkage stress when the product contracts as it cools to the normal ambient temperature.

Construction polymers have an expansion coefficient which is 4 - 10 times larger than that of concrete. When bonded to a concrete substrate this difference can cause failures when significant temperature drops are encountered. Rigid, high HDT construction polymer installations are most prone fail under these circumstances, unless heat formation during cure, the bond-line thickness and the polymer volume fraction are properly controlled.

In specifying use of a particular construction polymer for critical application, the potential for significant interaction of the material's expansion coefficient, the mass involved, the exotherm on cure, the cure shrinkage and its modulus (and change with temperature) must be considered.