We receive frequent calls from customers, owners and engineers to inquire how fast our structural epoxy injection resins cure. However, there is no accepted universal definition of “cure”. Many of the standardized tests (including ASTM C881 and AASHTO M235) which apply to epoxies used in construction require that test specimens be conditioned at a constant 73°F for 7 days prior to testing. Most epoxies are assumed to be completely cured (full strength) over that period. 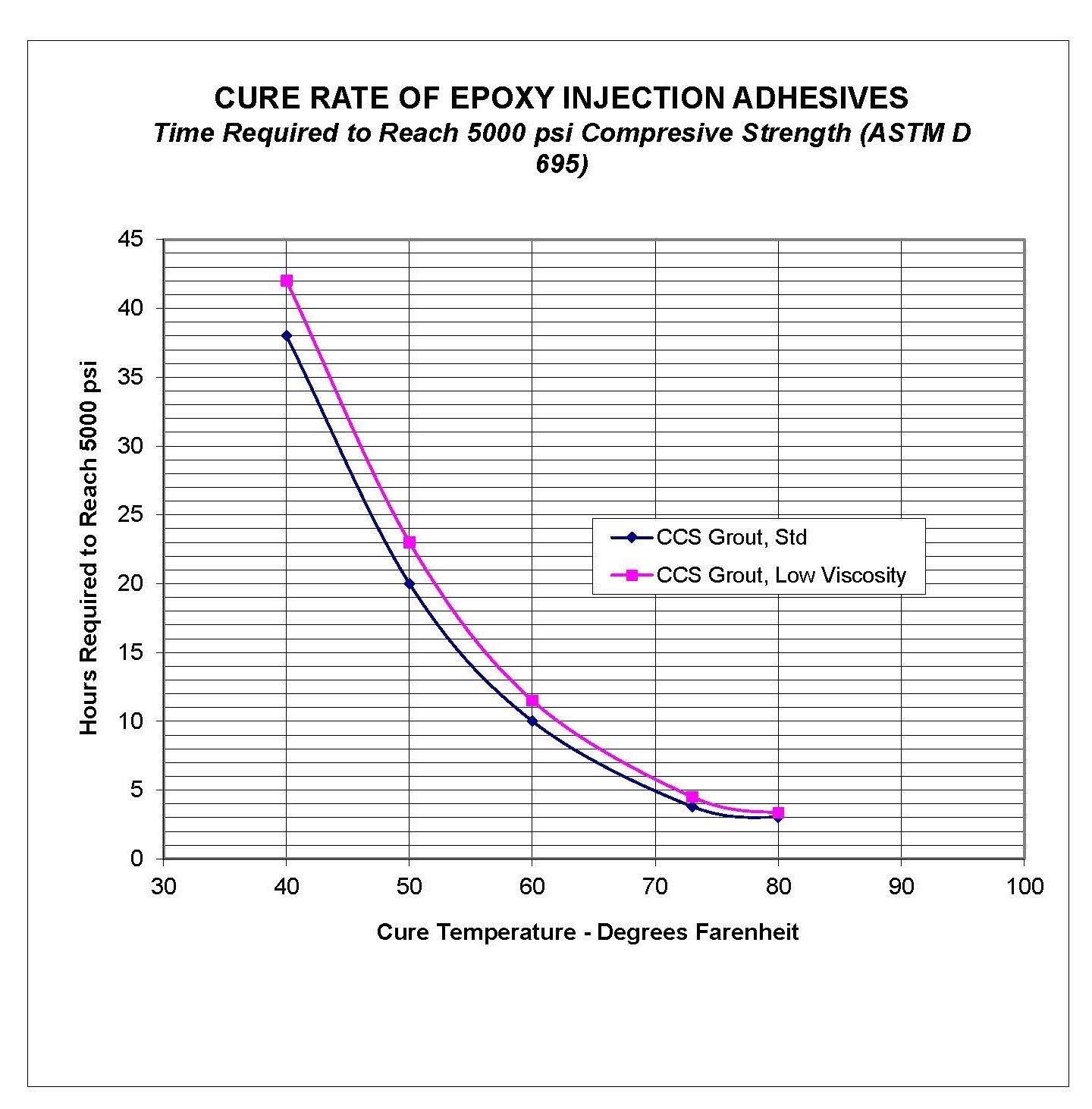 Ambient temperature curing epoxies typically used in concrete construction and repair generally consist of two components: an epoxy resin (part A) and an alkaline hardener (part B). When the two components are mixed at the proper ratio, a polymerization reaction starts. This reaction is also called cross-linking because the two components connect to each other like steps on a ladder and then the ladders connect to each other in a three-dimensional pattern. The newly formed polymer (in the case of structural epoxies) is transformed to a thermoset polymer—it won’t melt--unlike other plastic materials which are not cross-linked and will melt. These plastics that melt are called thermoplastic (like the plastic used in soda bottles).

The polymerization reaction rate for these epoxies is based on the temperature of the substrate receiving the epoxy (the substrate temperature generally is the same as the epoxy). If the epoxy components are warm, they react faster and if cold, the reaction is slower. Back in the 1880’s, a professor named Svante Arrhenius derived a thermodynamic formula that describes the relationship between reaction rates and temperature dependence for most chemical reactions including polymerization. The take away is that for every interval of 10°C or 18°F, the epoxy curing reaction is roughly affected by a factor of 2. So, if you know that the epoxy in question is nearly full strength in 10 hours at 72°F, that same strength development could require 20 hours at 54°F or 5 hours at 90°F.

Contractors who truly understand the behavior of the epoxy they are using can add heat to intentionally speed the cure of the epoxy. This may be an absolute necessity to utilize in cold weather epoxy applications. In very hot summer conditions, the opposite may be helpful, that is, to store the epoxy components in a cooler location prior to use.

Epoxies used in construction have gel times which are typically also measured at 73°F. In many uses, when you mix epoxy components, the gel time correlates with the useful life of the mixture. When the mixture of the parts A and B is left in a bucket longer than the gel time, it will generally be too thick to use. The same temperature dependence described in the above paragraph also applies to gel times. Of course, knowledgeable users of epoxies also know that the formation of the epoxy polymer releases heat (the technical term is it exotherms). As a result, bulk quantities of recently mixed epoxies will often become very hot (could even cause a fire) unless the mix is placed or dispensed in thin cross-sections. So the gel time of a given system is also dependent on the amount that is mixed and is usually specified in a given volume or weight.

ChemCo makes some epoxies that intentionally have very long gel times and are very slow to cure. Why? Some of these epoxy adhesives (both liquids and pastes) can be used in large bulk applications or thick cross-sections, for example to fill large voids in concrete without developing excessive heat exotherms which can damage the epoxy itself. Or, these long potlife adhesives can be mixed in bulk and used or applied over an extended period, such as used with a bulk loader (see right). If you need help with a long potlife or gel time epoxy, please call us.

Now that you have this insight you may better understand the above cure chart that provides information about a couple of our epoxies. The cure rates (and strength development) are provided at various temperatures. Although the final (fully cured) compressive yield strength of these injection resins on the ASTM D-695 test is far higher than 5000 psi, we have used this number as a starting point comparison because in most examples, it represents an equivalent compressive strength to the fully cured concrete that the epoxy is being used to repair.